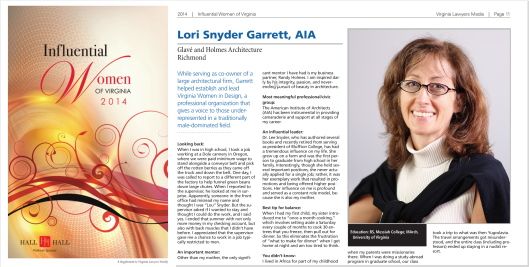 Glavé & Holmes Architecture is proud to announce Lori Garrett, Director of the Higher Education Studio, has been named one of the 2014 Influential Women of Virginia by Virginia Lawyers Weekly.

The Influential Women of Virginia awards recognize the outstanding efforts of high-achieving women across the Commonwealth. The honors are given to individuals who are making notable contributions to their chosen professions, their communities, and society at large. Lori was nominated for the award based on her efforts to reduce the obstacles faced by diverse and emerging members in the architecture industry.

For more information about the award and to see pictures from the event, visit valawyersweekly.com/influential-women.

Pope Chapel, located on Christopher Newport University’s campus, was designed to be a place of celebration and ceremony for students of all faiths. The campus has been in a process of transformation over the past decade, constructing multiple new buildings in an American neo-classical style. The Chapel is situated next to Trible Library and is part of the buildings that comprise the main entrance into the campus center. As such, the Chapel is designed to contextually reflect the campus character and to be a gateway structure for the University.

Glavé & Holmes Architecture is pleased to announce that our design for Washington Hall Exhibit at Washington and Lee University has won First Place in the Historic Preservation category of the 2013 Interior Design Excellence Awards.

Listed on the National Register of Historic Places, Washington Hall (c. 1824) was known as “the Center Building”, an appellation referencing its central importance as much as its physical location in Washington and Lee’s historic Colonnade. Important administrative functions, including the offices of the President, Provost, and University Development, fill the 24,400 square feet of this elegant three-story building.

Working within the confines of a historically significant lobby space while adhering to the Secretary of Interior Standards for Rehabilitation and LEED principles, the design sought to reconcile four main goals: (1) Create exhibit space used to educate people about and honor George Washington’s role in founding the university; (2) provide a beautiful and welcoming public lobby; (3) provide space honoring University benefactors; and (4) make sure students and faculty still felt comfortable using the space, thereby keeping it active and lively.

We are pleased to announce that our Interior Design Studio has received First Place in the LEED category of the 2012 ASID IDEA Awards for their work at Washington and Lee University’s Hillel House.

The primary goal was to create a building that serves as a home for the Hillel organization by providing a space to foster community. Since the University’s Hillel organization desired to welcome both Jewish and non-Jewish students to the facility, the design aspired to reference Jewish culture and religion in a non-literal way. Rich materials such as mahogany café windows, a Jerusalem limestone entry wall, and a wooden bowl for Jewish ritual hand washing reflect authenticity and craftsmanship. These elements also incorporate sustainability features, utilizing low-flow plumbing technology and sustainable forestry practices. In addition to these materials, the wood flooring throughout is rapidly renewable strand woven bamboo, a material that supports clients the environmental initiative as well as providing a warm, elegant and practical flooring solution.

An illuminated acrylic panel is located at the central entrance. Inscribed with Hebrew text, this panel captures the essence of the Hillel mission – “Shalom”, meaning peace, completeness, welfare and greetings of welcome. The vibrant colors, textures, materials and furnishings enhance the beauty of sharing through collaboration and celebration of community. Additionally, an elevated terrace provides a place for social interaction and soaking in the natural beauty of the distant mountains.

The National Terrazzo & Mosaic Association is pleased to announce the winners of the 2012 Honors Award. Among the winners is the Mary Brock Forbes Hall at Christopher Newport University. The award was presented to David Russell of Tile & Terrazzo, LLC, the contractor who completed the work.

Please see the attached press release for a complete list of winners.

The Carole Weinstein International Center at the University of Richmond has received an Award of Honor in the Contextual Design Category from the Virginia Society AIA. The 56,000 GSF structure reflects the surrounding campus buildings through its scale and materials of red brick with carved limestone detailing; it also alludes to the Center’s purpose through distinguishing itself in its expression of form and through iconographic clues in the building fabric.

The Virginia Tech Visitors & Undergraduate Admissions Center has been awarded LEED® Certification, established by the U.S. Green Building Council and verified by the Green Building Certification Institute (GBCI). LEED is the nation’s preeminent program for the design, construction and operation of high performance green buildings.

As the gateway to the campus, the new 21,690 square foot Visitors & Undergraduate Admissions Center is a “signature building” for Virginia Tech. The architecture of the Visitors & Undergraduate Admissions Center combines elements of the traditional Collegiate Gothic with more contemporary interpretations, which integrates the building with the core campus. The Visitors Center presents an exhilarating view from an airy reception space through large glazed openings in a setting that is welcoming and accessible to the user. 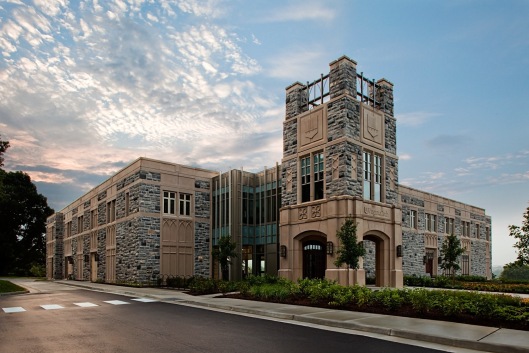 The Newcomb Hall Renovation at Washington & Lee University has been awarded LEED® Silver, established by the U.S. Green Building Council and verified by the Green Building Certification Institute (GBCI). LEED is the nation’s preeminent program for the design, construction and operation of high performance green buildings. This is the first LEED® Silver Certification for the University.

Newcomb Hall is the westernmost of five buildings comprising the Colonnade that forms the heart of the Washington and Lee University campus.  As part of the Colonnade, the building is historically significant and, among other distinctions, is listed on the National Register of Historic Places. G&HA preserved most of the historic fabric of the existing building. The character and style of the existing building was maintained on the exterior, and the interiors were upgraded to current standards within the limits of preserving and maintaining the existing historic integrity and character of the individual spaces and of the building as a whole.

Richmond, Va. (June 1, 2011) – Glavé & Holmes Architecture has been named the 2011 Palladio Award winner in the New Design & Construction category (more than 30,000 square feet) for their design of the new Carole Weinstein International Center at the University of Richmond. The Palladio Awards are a national program that honors outstanding achievement in traditional design. Glavé & Holmes is one of only nine architectural firms in the country recognized by the 2011 Palladio Awards Program.

Celebrating international education on a campus that is renowned for its International Studies program, the design of the Carole Weinstein International Center was inspired by the academic mission the building serves and the surrounding campus. The 56,194-square-foot Collegiate Gothic building represents a resource for study-abroad initiatives, a home-away-from home for international students, and a forum for the larger community to exchange cultural experience. In addition to housing the Office of International Education, the building hosts the departments of Geography and the Environment, Latin American and Iberian Studies, and Modern Literatures and Cultures, as well as interdisciplinary programs that address global issues.

The building’s design incorporates global cultural elements such as rosettes depicting traditional West African symbols for peace, truth, understanding and other virtues advocated by the building mission. An open-air courtyard was selected as the central organizing feature of the building because of courtyards use in architecture throughout most cultures. The scale of the courtyard and its visual connection to second floor balconies promote an intimacy for the multi-use central gathering space. A columned arcade surrounds the courtyard, with the primary public spaces (Commons, Café, Gallery, and Office of International Education) opening onto the arcade. The courtyard’s paving is patterned in the form of a mandala, an iconographic traditional art form referencing ideas of Center, Universe and Harmony that are shared by many cultures. It features bluestone pavers with accent stones from 48 countries and a globe sculpture fountain. The building embodies the University’s commitment to sustainability and is a candidate for a LEED Gold Rating.

The center’s technological backbone facilitates collaborative teaching and research between Richmond and partner universities in other countries. Live satellite links permit faculty and students in Richmond to participate virtually in lectures and courses at universities outside the United States, as well as engage in real-time discussions with counterparts around the globe.

“The Palladio Awards jury was in agreement; the University of Richmond’s new Carole Weinstein International Center is a beautifully handled example of 21st century campus Gothic,” said S.D. Don Zivkovic, AIA, FARA, one of the judges for the Palladio Award. “And it was especially gratifying that beyond a courteous contextuality, which is laudable in itself in these days of rampant architectural egotism, the quality of the design and execution of the International Center contributes to also setting a contemporary standard for the building tradition of which it’s a part.”

The Palladio Awards are sponsored by Traditional Building, which is published by Restore Media, LLC. The Awards are named in honor of Andrea Palladio, the Renaissance architect who created modern architecture for his time while using models from the past for inspiration and guidance.

Founded in 1965, the award-winning Glavé & Holmes Architecture specializes in cultural, higher education, hospitality/residential, interior design, and urban architecture projects. Glavé & Holmes Architecture believes that the creation of successful, context-responsive projects requires a collaborative process involving a well-structured design team, the client, the community, and other constituencies. From the firm’s inception, this principle has guided its work, resulting in exceptional service to diverse clientele.