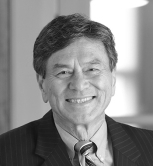 Robert L. Bryant has joined Glavé & Holmes Architecture as the Director of Finance after consulting with the firm for more than seven years since 2000. He brings extensive experience in the design industry as well as more than 15 years in banking and finance. Bob most recently worked as the Managing Partner at Ascent Energy Partners and previously as President and CEO of HC YU and Associates. He holds a Bachelor of Science in Engineering from the US Military Academy at West Point and has more than 40 years of business and technical experience.

Lantian Zhang has joined Glavé & Holmes’ Higher Education Studio. Lantian holds a Bachelor of Architecture from Wuhan University in China and recently earned his Master of Architecture from Virginia Tech. He gained experience while interning with Cooper Robertson and working as a Student Designer at the Community Design Assistance Center in Blacksburg. During his time at Virginia Tech, he served as a graduate teaching assistant. Lantian is skilled in AutoCad, Adobe Suite, Rhino, and Sketch-up, and enjoys photographing architectural elements in his spare time.