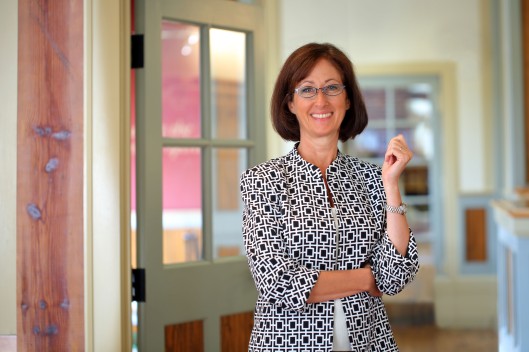 Glavé & Holmes Architecture is thrilled to announce Lori Garrett has been elevated by The American Institute of Architects (AIA) to its prestigious College of Fellows.

Lori Garrett, FAIA, LEED Green Associate, was one of 178 architects to receive the honor this year. Fellowship is the highest membership honor bestowed by the AIA, with approximately three percent of the AIA’s 88,000+ members having this distinction. It recognizes exceptional work and contributions to architecture and society.

Lori’s commitment to transforming higher education through contextual design, preserving campus heritage and sustainability, and advancing engaged learning led to her nomination for Fellowship. After joining Glavé & Holmes in 2003 as an associate, Garrett quickly rose to leadership. She helped lead the firm’s work with Higher Education clients to become the top revenue producing market for Glavé & Holmes. She was named a principal in 2005, and in 2007, she became the first female owner in the firm’s history. During her leadership tenure, the firm rose from 28 to 60 employees.

Both locally and nationally, Lori has made a strong effort to reduce the obstacles faced by the diverse and emerging members in the architecture industry. After creating Richmond Women in Design – a group that has grown to over 250 women – she went on to assist in the formation of Virginia Women in Design, a Knowledge Community of AIA Virginia. Garrett also currently serves on the AIA Diversity Council.

The College of Fellows Investiture Ceremony will take place in Orlando, Florida on April 28 as part of this year’s National AIA Convention. See the full list of 2017 Fellows from the AIA here.

“We are proud to have such an influential person as part of our firm, and we know Lori will continue to inspire and change the world around her for the better,” Glavé & Holmes President Randy Holmes said.