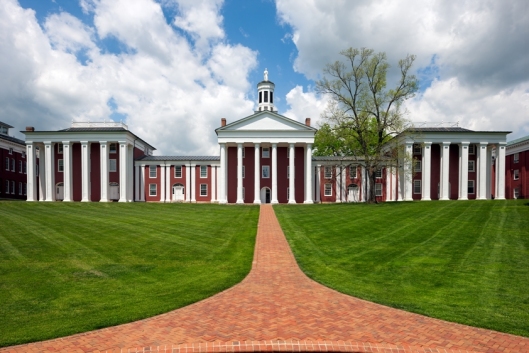 Payne Hall (c. 1831), Washington Hall (c. 1824), and Robinson Hall (c. 1841), three of the five buildings in the Colonnade, are National Historic Landmarks and at the center of the Washington and Lee University National Register Historic District. They are the most historically significant buildings on campus and G&HA led the design for a complete rehabilitation of all three structures. The team worked with the University to optimize use of space for faculty offices, work rooms, classroom space, and administrative office space including the office of the President and his staff. In addition to academic space, G&HA participated in the creation of exhibit space telling the story of George Washington’s role as a major early benefactor of the University.

G&HA followed the Secretary of the Interior’s Standards for Rehabilitation guidelines in preserving the major character defining features in each building while upgrading all the mechanical, electrical, plumbing, and life safety systems throughout. The interior environment was also significantly refreshed, creating a warm and inviting atmosphere with ample opportunity for casual interaction between students, faculty, and staff. Sustainable features include chilled beams, refurbished original windows, recycling stations, and sustainable materials throughout.

The University has continued to show a commitment to sustainability since its first attempt at earning a LEED certification in 2010. G&HA helped W&L preserve Newcomb Hall, another building making up the historic Colonnade, and earn the first LEED Silver certification for the University.